I just finished reading a fantastic book: The Grace Effect by Larry Taunton. 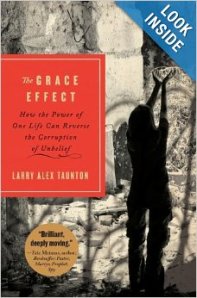 This book had been recommended by Eric Metaxas on a Breakpoint commentary, so I expected to find some intellectual vigor, and I was not disappointed. But I also found something that I had not expected: a story that repeatedly touched my heart.

The book begins with the author’s fascinating discusssion with the late Christopher Hitchens, one of the famed New Atheists. Hitchens’ central claim was that the world is better served by atheism than by Christianity. Larry Taunton, who both debated and befriended Hitchens, recognized that the beautiful, kind, and moral  things that Hitchens valued were benefits of the very Christianity that he derided. Through the influence of Christianity, Hitchens enjoyed the gifts of “common grace.”

After trying to explain the amazing concept of grace to Hitchens, Larry searched for a current illustration that would be meaningful to Hitchens. Without realizing it initially, Larry then witnessed a powerful demonstration of “the grace effect” in his own life as he and his wife went through the difficult process of adopting a young girl from Ukraine. Vividly painted before his own eyes was the dramatic clash between the dark products of an atheistic worldview and the colorful gifts of a Christ-informed worldview. Near the end of the book, Hitchens meets Larry’s adopted daughter and is surprised by what he sees.

Biblical grace is much more than forgiveness: “grace” refers to every good gift from God. I marveled as I was reminded that even the most basic of “common graces,” such as simple kindness and civility—such as the willingness to wait one’s turn in a line at McDonald’s—are influences of Christianity.

Every good thing that we enjoy or value is a gift from God—whether we acknowledge the Giver or not.

2 thoughts on “Looking for a great book?”